The course of life 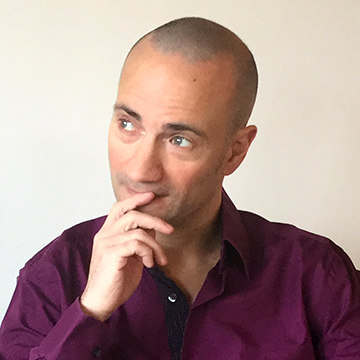 If the aspiration to practice an artistic profession and especially that of acting was imperative early on as an obvious, my vocation for pedagogy found its roots in my scholarship, during which I denoted a break between the systematic objectives of a teaching and the fulfillment of each one. I found that Cartesian education favored a rational understanding of reality to the expense of an emotional and intuitive apprehension, yet complementary, relegating the body to the rank of vehicle or sublimating its athletic performance or aesthetics, to the detriment of the search for a harmony between attitude, gesture and thought. The practice of martial arts had a great influence on my conception of the exercise of an artistic discipline, based on bodily involvement, as much as spiritual and ethical.

I trained as an actor at "Theater School Mirier" in Lausanne (1991-1994), school founded by Michel Perrier and whose pedagogy was based on the methods of Constantin Stanislawsky and Mikhail Chekhov, completed by a practice of singing, dance, mime, clown and show creations. At the same time, I met Fabien Gargiulo, ex-actor of the "Théâtre du Soleil", who introduced me to the commedia dell'arte and with whom I worked for a few years. I played in classical and contemporary registers, clown, commedia dell'arte, in creations and street shows. Then I decided to continue my training at "Lassaad International Theater School", whose teaching is based on movement, according to the pedagogy of Jacques Lecoq.

Since then, I continued to perform on stage and began teaching in France, Switzerland and Belgium. Always focused on the idea of a resolutely visual theater, I was also interested in graphic design, photography, as well as writing and audiovisual production. I followed continuous training in these areas, to study the strength of images on our understanding of the world.

I moved to Paris in the course of the 2004-2005 season, with in one hand my commedia dell'arte mask case and in the other a solo show. So I played "Déjà Vu ? Contes Contemporains", by the Swiss author Thomas Crausaz and I took part in various productions, while beginning to give my first workshops and Parisian courses. While I also participated in the life of cultural and artistic associations, my training activity was developing. I gathered a group of students with whom I created a show that was played at the "Théâtre Tallia" in Paris and in the street at the "OFF Festival of Avignon" in the summer of 2007. From there was born the Company "In Commedia Veritas", with which I conducted a research around the commedia dell'arte to write and perform original frameworks, both rooted in our time, while regaining the spirit of the original all'improvviso comedies.

In 2007, My training activities were grouped under the name of "Atelier Theatre Patrick Forian", which was adopted during an entertainment that I directed for the museum "Galiéra" during the Nuit des Musées, as part of the exhibition "Galiérock" consecrated to J.-C. de Castelbajac. As the training, acting and artistic consulting activities continued to grow, I decided to restructure myself and in 2008 I founded "l'EURL Atelier Théâtre Patrick Forian". The stakes were high, because I defended the idea of organizing artistic and educational activities, thanks to a commercial legal structure. I practiced during four years in this legal form, then I made the decision of a new restructuring. It is now the association "Thema Production"  which was born in 2013, to manage my activity as well of training - "Atelierforian" - as of creation - "Thema Théâtre Compagnie" - , in order to perpetuate the transmission knowledge, with new opportunities for development and collaborations with other structures, in France and elsewhere.

As a result of this last decade :

Some thousands of people from all over the world participated in my classes, workshops or acting sessions. I collaborated as artistic advisor and actor director, including the comedy duo "Ro&Cut", the one man show of Fonzie "My Happy Days", "The Thousand Lives of Jonathan" by and with Jérémie Boireau or "War does not have a Woman's Face" staged and performed by Cécile Canal. I intervene with professional schools of actors, of MJCS, for professional and amateur theatrical companies, for the "House of Amateur Artistic Practices", for colleges, high schools ; but also with theatrical improvisation groups, to open their playing capacity thanks to the expression of the body. Actors from my workshops were selected at the "J. Lecoq International Theater School", at the "Lassaad International Theater School", Brussels, at the "National Conservatory of Dramatic Art", etc. 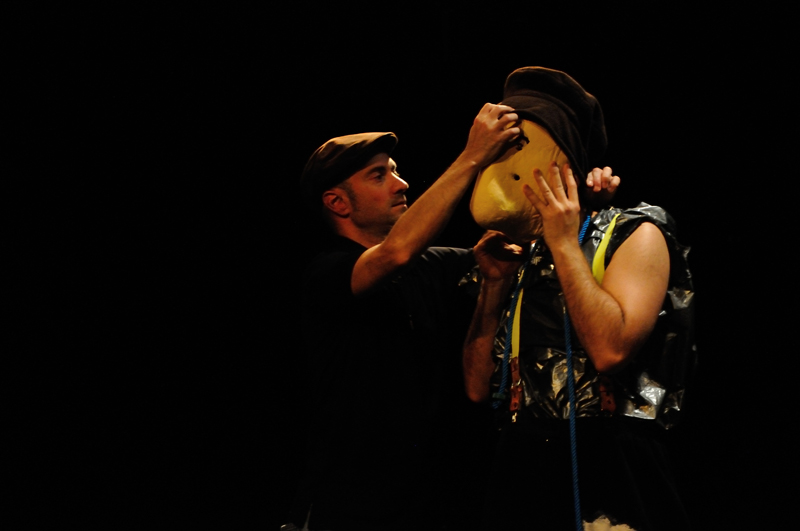 Under the label Atelierforian, I continue to build my methodology of learning acting, always inspired by a teaching resulting from the pedagogy of Jacques Lecoq, the method of Mr. Chekhov and the study of different mime techniques, but also thanks to my research on popular archetypes and the perception of the body in a scenic or cinematic space; not to mention the collaborations with other artists and trainers I met during my career, such as Mario Gonzalez, Daniel Caran or the masks factor Den. I participated in the meetings of a think tank on training in the field of mime and gesture arts. I am also editor of the magazine "Mime", whose first issue appeared in 2012. Since 2012, I am a member of the association "the Masks Creators", with whom I participate in research meetings, public events and publications about the theater mask.

Alongside my training and research activities, I work on various artistic projects, including the Larven, show, created in 2013, in collaboration with Cie Movar. For this show, we have designed a family of characters and masks inspired by the "larven" from carnival of Basel. Since 2015, I perform in a solo show called "The Morons, from the origins to the present day" ironically recounting the story of stupidity.

Today, my activity is always divided between creation and distribution - from the solo show to a creative residency of a visual show involving actors and dancers -  transmission, photographic studies and writing for audio-visual projects.

My teaching comes from the pedagogy of Jacques Lecoq, the training of the actor according to the method of Michael Chekhov, the study of popular archetypes through the tradition of Italian comedy and mime techniques. I have indeed followed a first training as an actor that was rich by its eclectic curriculum and a second one focused on physical training and mask playing.

My encounter with the mask was a revelation and will become an essential element of my career, in correlation with the physical implication of the actor. The perception of the image, whether scenic or graphical or cinematographic, also plays a fundamental role in the conception of my artistic and educational approach.

More than twenty years of teaching and research have led me to design a methodology for learning acting, based on the corporeality of the actor, as well as on a special attention given to the relationship with the public. I rely on techniques such as the study of movements and articulation of the body, the distancing of the actor facing his emotions and those of the character, imagination and observation of group dynamics. My research on the archetypes of the popular theater and the commedia dell'arte have nourished my will to renew the tradition of the mask work, in order to provide tools both fundamental and in resonance with the requirements of our time. 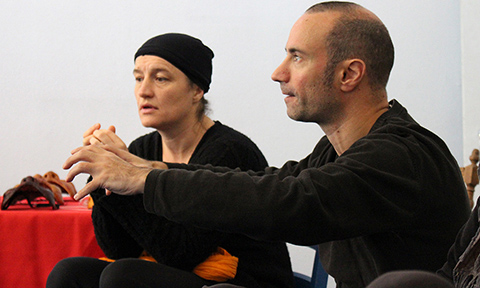 The use of the neutral mask also has a primary influence in my pedagogy, as it helps to find a correct expression of intentions and feelings. It emphasizes gesture, posture and behavior in response to the environment and others. The exercises with these masks confront actors with the relationship between what we think we are expressing and what is perceived by others, comparing attitudes, gestures and universal behaviors to those influenced by each person's culture. The study of character masks highlights the range of typical characters that forged the traditions of popular theater. The knowledge of the archetypal postures associated with these masks makes it possible to reproduce universal behaviors with clarity for the public. 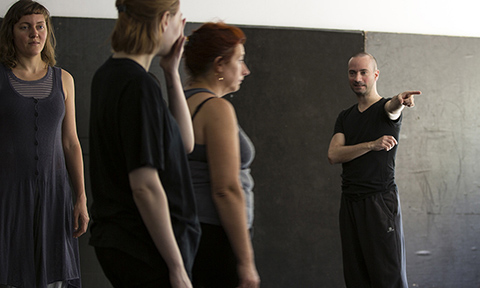 The exercises I developed on group dynamics highlight the use of space for its dramatic value, relying on the disposition of each to the others (individually and / or in groups) ). Actors learn to react naturally to their environment (imagined or real), performing a work of imagination and relying on sensory memory. The study of movements is carried out through concrete actions and expression of feelings, in order to explore all possible nuances that help to express an inner state and to make physical actions credible and sincere. Exercises on motion analysis, as well as a work on the look and the intention, of the most subtle expression to the amplification by the body, will bring precision of the gesture. The actor's physical involvement and the awareness of his role in the scenic composition, allow him to develop his interpretation skills, to extend his corporeal ease, to consolidate his presence, to enrich his imagination, to assume and clarify the expression of his intentions. 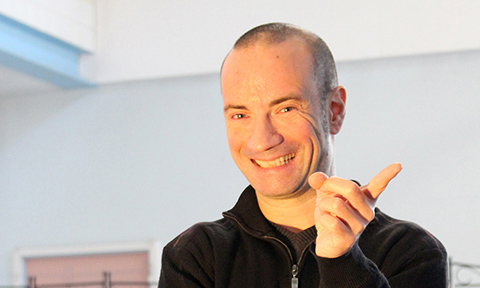 These different precepts which constitute my method aim at the perfection of the play of actor, as much as with the development of the personality of each one and his relation to the others.